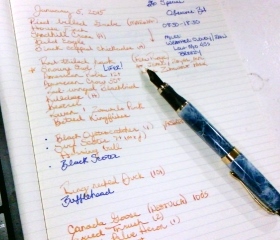 The day held promise and I hoped for 60 species to jot on my list.  Joey (my black and white Chihuahua) and I left at 8:30a.m. on the rainy morning of January 5, 2015.  It was going to warm up to the mid 40’s with intermittent showers.  One of our first birds was to be a Snowy Owl – which would be a lifer for me.  I’ve driven hundreds of miles in search of this bird before, and came up empty.  I was so desperate once that I tried to make a snowy owl out of a plastic store bought owl made to scare off birds.  The one hundred and three mile trip down to Eugene was done in silence, a custom I’ve developed over the years – radio off, eyes and ears open.  I checked off the usual suspects down Interstate 5, but the goals for the day were first the elusive Snowy Owl last seen two days ago sitting in the mud at Fern Ridge Reservoir, and the Tundra Bean Goose that took a wrong turn from Russia and has been living in a field just south of Tillamook, Oregon.

I drove straight to the exact location to where the owl was last seen.  I met Warren, an nice older man sporting a beard like my own, and his companion at the gravel drive off the road, just big enough for two cars.  On his shoulder was a tripod that held a camera and lens as long as my arm.  It’s a funny thing about birders, no hello’s, not even a nod, just a “Do you know where it is?”

We chatted some as we made our way down the well beaten path.  The owl had been in the same location for a few weeks (quite a long way from it’s Arctic tundra habitat).  I purposely waited to see it until the break of the new year so it would count as part of my Big Year 2015 (a lofty goal to see 600 bird species in the lower 48 states).  I was loaded down with my EDC (Every Day Carry bag) on my back, my tripod with my heavy 20×80 binoculars, the video camera in one pocket, and small binoculars in the other pocket.  We cleared the tall reeds to reveal the vast mudflat (usually it’s a lake). I set up my tripod and scanned the flats.  I pointed my binoculars to the area where the owl was supposed to be, and there it was, sitting on a stump about a half of a mile away just above the water.  The newest member of my lifer club.

Wait a minute.  Did you catch that I saw this owl, which is not even two feet tall, a half of a mile away and deemed it identified?  Here’s the thing.  I have uncanny luck at finding rare birds within three minutes of arriving at a described site.  This Snow Owl finding may have taken less than that.  However, we spent twenty minutes discussing if this was an actual bird (nevermind an owl) or not from this distance.  It was a process of deduction really.  This object was whitish (looked a bit dirty from the distance), it was as big as the owl should’ve been, it was exactly where the owl should have been, it was behaving exactly as the owl should have been, it had the exact owl profile, and on more than one occasion I swear it turned it’s head.  Snowy Owl.  I’m sad that I couldn’t quite look it in the eyes, but I’m confident this is what I saw.  Warren confirmed it – and he saw it twice before.  After the official nod, they couldn’t believe I was leaving to head up the coast back to Portland – but the Tundra Bean Goose was the next target.  I said my good-bye’s and thank you’s and was off to Florence. 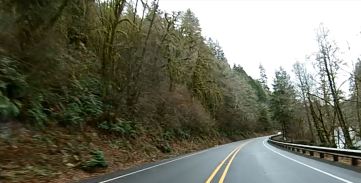 Joey and I stopped at McDonalds for lunch as soon as we rolled into town.  I was getting concerned about the time as it was already almost 1pm.  I drove through Florence, up to Waldport, and north to Yachats.  I was going to stop in Newport to see the reported Burrowing Owl, but I decided I didn’t have the time.  I have a whole year to see this other owl and they are relatively common.  I decided to stop at Yachats instead and check off some gulls at the park.  I was lucky to find a Black Oystercatcher, a female Black Scoter and a female Surf Scoter (chasing each other). 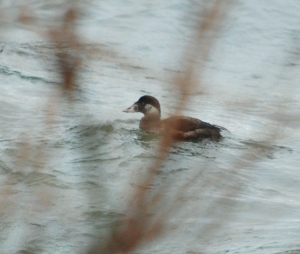 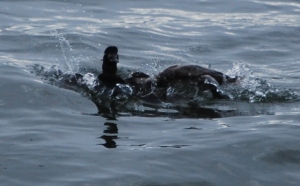 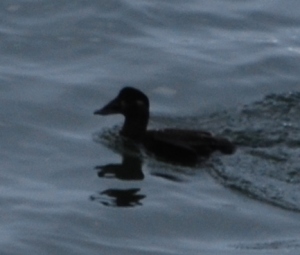 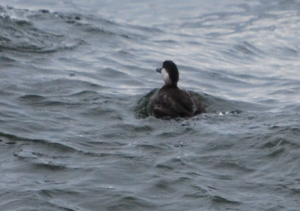 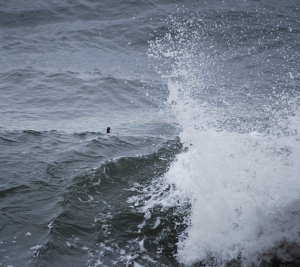 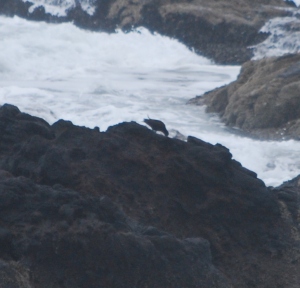 It was 4:30 when I got to the Nestucca Wildlife Refuge just south of Tillamook.  I slowly scanned the fields as I worked my way up to the observation platform.  The sun was dimming and I knew I was running out of time.  These short winter days are rough on birders.  I carefully looked at every single goose in the many acres of flooded field.  I saw nothing but Canada.  One after the other, Canada, Canada, Canada.  Occasionally I’d see one facing away from me (showing me it’s butt), and then my stomach would flutter because the feathers look so much lighter from that view.  But no, another Canada.  I was getting rather disappointed.  I started scouting as far as my 20×80 binoculars would go before birds stopped looking like birds.  On the edge, all the way back toward the highway along the river, were two small groups of geese.  They were mere specks, like looking at a raisin at about 20 feet a way.  One by one I checked the field markings.  My eyes were watering from the strain.  I stopped a few times to relax and sipped my chestnut-praline latte.  Back to work I went, one by one.  They were just too small.  I looked again at the ones nearly at my feet.  No bean, just Canada’s.  As the sun dimmed further, I felt defeated.  I had seen this goose in December with my lovely girlfriend, and thought that this would be an easy yet important bird to bag for 2015.  I was wrong.  I packed up my latte and tripod and turned to see a beautiful Varied Thrush in the tree just in front of me.  This bird used to be one of my Mom’s favorites.  It just sat there looking at me, if it could have smiled, I think it would have. I smiled to it just the same, shrugged my shoulders, and drove home.

9 hours from start to finish (but just 3 hours of birding).