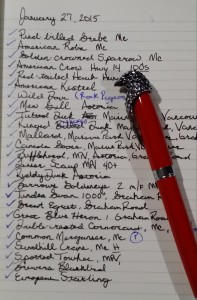 After my San Francisco Rustic Bunting trip was scrubbed this morning, I decided to head out and find a couple of more local lifers. The weather was cloudy but pleasant, it stayed in the 40’s all day, rained some, some fog, some mist but no wind. I arrived at Marine Park in Vancouver just after 11:30 (with chestnut praline latte in hand). The first bird of interest was the rare and mysterious Tufted Duck. It is a common and friendly bird of the United Kingdom and surrounding countries, but not so common over here in Oregon! Below are photos of my findings. This duck was photographed at quite a distance, but I managed to capture him here.

There were other birds here too that were nice to look at. The Spotted Towhee, the Barrow’s Goldeneye, and several Lesser Scaup.

I then took off for Astoria to find a Black-tailed Gull. It was a two hour drive so I put in Jim Butcher’s novel I’ve been listening to and headed west. I did stop at Graham Road to look at the ponds. I didn’t have much time as it was almost 1pm when I left Vancouver. Daylight was going to be an issue. However, one must stop to see the swans.

When I got to the side of the street between Dairy Queen and the Bayview Motel, I spotted the gulls. There were all lined up neatly on the pilings. I traded seats with Joey, and began scanning the gulls with my 10×50 binoculars.

Mew, mew, mew. All Mew Gulls. I went down the line time after time, mew, mew, mew. I might point out that after checking the emails again from OBOL, I was looking for the wrong gull. I began looking again for a Black-headed Gull (not Black-tailed). Apparently there is a big difference. After I went back and forth on the pilings, they all flew away – only to come back sitting on all different pilings. So, down the line I went again. Mew, mew, mew. I gave up. It was getting late and I had spent over 90 minutes looking at about 30 gulls of all the same specie. This gull has been reported and confirmed at the exact location I was looking at for the last two days. No luck. Birds have wings. They fly.

So one lifer today, that always makes a birder happy.

A girl travelling around the world on a motorcycle.