This is how far this little scoter is from home: 5,278 miles.  He is from Holland and he took a very wrong turn.

Needless to say, I had to go see this bird.  It is the first ever sighting of the Common Scoter in the United States.  Ever.  I left Scappoose, Oregon on February 10, 2015 very early in the morning and arrived at Crescent City, California at about 3pm.  The ten hour drive down Interstate 5 was like my backyard, but once I turned right at Grants Pass, I saw something I’ve never seen before.  The Redwoods National Park is something everyone should see – I mean everyone.  These trees were so big that I couldn’t even photograph one in the frame.  You seriously need to back up a long ways, but you can’t because there are these monstrously beautiful trees everywhere. 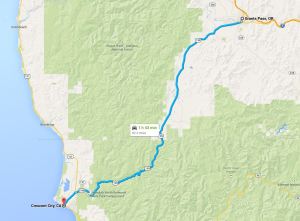 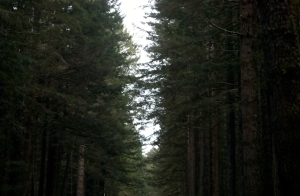 Daylight actually dimmed as I drove through the tunnel of redwood.  Trees large enough to drive though, trees hundreds if not thousands of years old.  It was breath-taking.

The winding Redwood Highway follows the Smith River almost exactly.  The signs of falling rock reminded you that for no reason at all, you could hear a loud whack on your roof or turn the corner to see a car stopped for “no apparent reason.”  It was a rather white-knuckle experience. 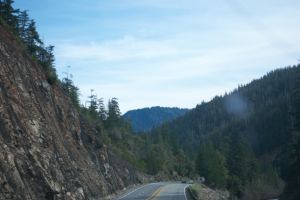 After driving through the little towns along the way, and crossing the many bridges, I made it to California and to Crescent City.  I had directions to the scoter, and with the help of GPS and my Note 3, I drove right up to the marina.  I did a quick walk around and found some loons (Red-throated and the Common variety).  A fellow birder told me that the scoter could be easily seen on the other side – so, I drove to the other side of the marina.  Within a minute, I had the Common Scoter in my binoculars – but I didn’t know that I did.  A local birder, by the name of Sky, actually told me what I was looking at.  I assumed it was a Black Scoter – but she quickly corrected me, then showed me the Long-tailed Duck.

Long-tailed Duck (in back)

I meandered toward Eureka, stopped at a park where I saw a few dozen elk taking an afternoon nap.  There are elk signs everywhere along Highway 101.  A Varied Thrush came by to say hello when I was looking at the elk, and then later I saw the Lincoln’s Sparrow that was rather friendly as well.  It was a good start to what was a three day excursion. 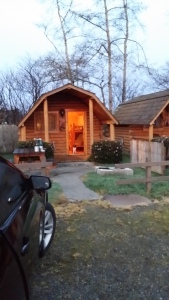 I stayed here at the Eureka KOA Kampground.  It was one of the nicest ones I’ve been to – and I’ve been to many.  There was a heater in the kabin, which was needed (this wasn’t San Francisco!).  The restrooms at this KOA were like a 5 star hotel – no joke, newly remodeled and very nice amenities.  At $60 a night, this was really nice.  I will be back again, I’m sure, as there is a lot to do in this area.  Perhaps next time I’ll bring my golf clubs.

The next day was planned for the famous Arcata Marsh and the Humboldt National Wildlife Refuge.  These are national 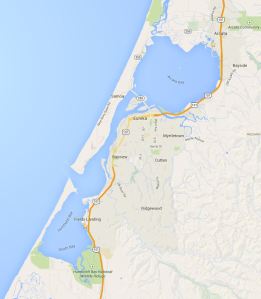 hotspots in February and my hopes were high in listing some very unusual bird species here.

The Humboldt Bay National Wildlife Refuge was put aside in 1971 and has about 4,000 of some of the most biologically diverse plants and animals on the planet.  Here is a link to it: http://www.fws.gov/refuge/humboldt_bay/

While the bird count was low for this day, it had some rockstars on the list.  I am going to do a separate post for the Arcata / Humboldt trip of February 11, 2015.  This was to be a day of very serious birding.  What is that?  Up early, make coffee at camp – no stopping for coffee, power bars and nuts and fruit on the run, not a single minute wasted.  Bird.  Bird.  Bird.

One thought on “In The Land Of Redwoods And Scoters, The Big Year Continues…”