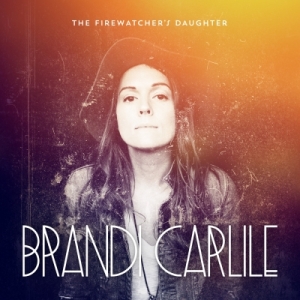 Brandi Carlile’s new album, The Firewatcher’s Daughter, was a shock to me.  I don’t think I live under a rock but perhaps I do because I don’t think I’ve ever heard of her before.  So, while working at my desk, I started to snoop around the ITunes store as I normally do.  She just released this album a couple of days ago so it’s on the cover page.  I clicked on it for some reason.  The song titles looked intriguing.  The reviews were phenomenal.  I sampled “Mainstream Kid,” and in two seconds it took me back to 70’s classic rock.  Mean, angry, fast.  Janus Joplin is back – and her pants are on fire.  She has 20 gallons of talent in a brass jar of bees and honey.  Don’t know what I mean?  Listen to that song.  I’ve heard many artists in my nearly 50 years – many of them amazing.  She puts most to shame.  She apparently has several albums – I don’t care, I just want to listen to this one over and over.

Wilder than a brushfire burns deep inside the bramble
Baby, I think God made your soul born to ramble
Maybe you’ll take to the far away places
Where life is gonna deal you a hand full of aces
But it doesn’t really matter how great the spaces

The main review on ITunes says to listen to “Wilder – We’re Chained.”   I believe it’s about family, being chained to them forever through whatever happens.  The melody doesn’t seem new but she is a damn good writer.  “Heros and Songs” is made of all the classic notes that is very pleasing to the ear.  It is sad, she slows everything down and breaks silence with notes from the past.  She talks to you about her hero, a lover perhaps or just a dear friend, but how she doesn’t care so much any more.  She doesn’t tell you why, it’s so sad that I wouldn’t even want to ask.  Her cracky voice is used wisely, not overdone – just honest to show her emotion in the words she sings to you.  It’s touching, slow, and real.

“Murder in the City,” is a favorite.  I see her sitting a top a dirty old bar in the late 1800’s singing this song.  She’ll start singing and strumming her guitar, the loudness of the rowdy bar simmers, the people turn to look and listen, then all that you can here is her smile and the words from this great story.

There is nothing worth sharing than the love that let us share our name.

The fast paced “The Things I Regret” seems to hit home, I can only remember what I want to forget.  Let them roll over me…when I doubt you.  Who writes this stuff?  I guess I am in awe of raw talent.  Just the previous song I was sitting in bar in the 1800’s, now I’m in the 1980’s where she is screaming into the mic on a brightly covered stage, fans screaming and dancing.  The heavy single drum beat that gets your foot tapping and the words making you say “Hell yeah!”.

The mix of slow, fast, angry, sad, and adventure makes my emotions run to every extreme.  “The Eye” is…sad, about loss, and regret.  At least, that’s what I get from it.  I am a sturdy soul…she say’s.  She thought she was so strong she writes in this song, only to discover she wasn’t as strong as she thought when she lost someone.  Wow, sadness runs amok!

“I Belong To You” is one of the most expressive songs I’ve ever heard. It’s devotion and sadness mixed with a poetic justice that all lovers want to hear from their significant other. If you die, I will die so I don’t have to miss you. Whoa. Here she sings “I Belong To You” while quietly strumming her guitar…I’m assuming in the dark, alone, and with a glass of bourbon next to her.

If I had all my yesterdays, I’d give them to you too…I belong to you.
I’m going to die the exact same day as you.
On the Golden Gate Bridge I’ll hold your hand and howl at the moon.
Scrape the sky with tired eyes and I will come find you. And I ain’t scared. Because I’m never going to miss you. I belong to you now.

Listening to her, you really do think she’d jump off the bridge so she wouldn’t miss this dear person. I’m just saying that it’s really good that she put those other fast electric songs on the album, otherwise this might be another Air Supply nuclear-depressant-bomb album that goes makes you drive off a cliff, even on your happiest day.

There are several other songs on this crazy ride she calls The Firewatchers Daughter.  Don’t listen to this when you’re trying to get something accomplished.  You won’t.  You’ll be either sitting in the chair with your head in your hands full of tears, or you’ll be dancing in the street with people you don’t even know.  It’s a magnificent piece of work.

A girl travelling around the world on a motorcycle.