It was lovely summer weather in the country, and the golden corn, the green oats, and the haystacks piled up in the meadows looked beautiful.  The Ugly Duckling, by Han Christian Anderson.

As most mornings do, this particular morning promised me an adventure.  This day I was to explore the Trojan Nuclear Power Plant park that had a paved trail that wrapped around trees, ponds, and fields.  The wintery Oregon weather was typical, clouds, mist, temperatures not cold but certainly not warm.  I challenged my birding chances by heading out at the worst time of day to see any birding activity.  I was going to squeeze as many birds as I could from this park – and squeeze I did.  It took me about three hours to walk the three miles or so that I did to feel satisfied that I’ve done my very best.  Yes, this year is about getting as many bird species as I can on my list, but that doesn’t mean I enjoy watching the birds any less than I typically do.

I first stopped at the Graham Road ponds off of Highway 30, just passed Goble, Oregon.  It was about 11:30 a.m.  My first bird was this lovely (and unexpected) Varied Thrush.  He sat there looking at me, just like I was looking at him.  Such a patient fellow.

I think looked out across the pond.  Several hundred ducks mixed with swans and geese sat resting, feeding and otherwise goofing about here. 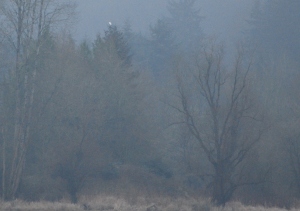 I did notice a Great Egret sitting in a tree across the way.  While heron’s roost in trees, I’ve never seen an egret just sit atop a tree before.  If I had a longer lens, I would have been able to bring him in closer, but alas, there he is, the white dot atop the tree.  As it turned out, after looking at these photos, I discovered the second one. It is such a pleasure adding new species to my 2015 list, and I did add some on this particular day.  These very interesting and beautiful Hood Mergansers were rather plentiful on the pond.  I managed to catch a few in mid-stride.

Enter the swan.  These Tundra Swans are quite something to look at and admire.  Grace, power, respect and love…all wrapped up in a feathered flying bundle.  One cannot be without awe when watching them. 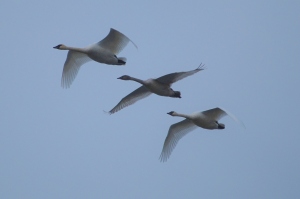 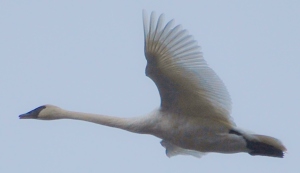 After the swans, I went over to the other side of the pond where I discovered what used to a be path to a blind.  It was quite over-grown with blackberry bushes, but it wasn’t unpassable.   I saw a Ruby-crowned Kinglet, a Bald Eagle, and a Song Sparrow while I made my way to the blind. 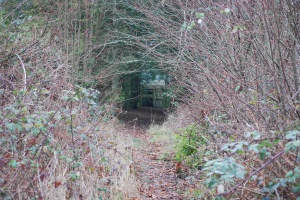 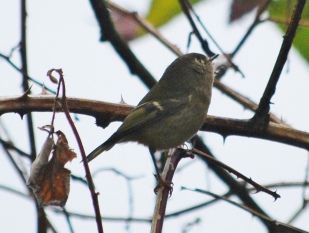 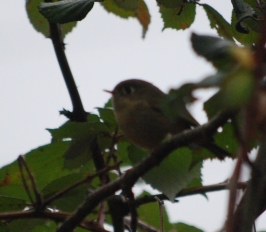 On my way back, I was lucky enough to see this Great Egreat and Great Blue Heron fly off together.  It was quite the sight.  I wasn’t ready for this, so my photograph was quite blurred.

The holes you see in this tree may be evidence of a sapsucker.  Yellow-bellied Sapsuckers are known for this behavior, however, that would be a rather rare sighting here in Oregon since they are an east coast specie.  I took this photo, however, because I haven’t noticed this pattern in a tree before. 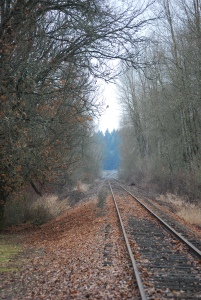 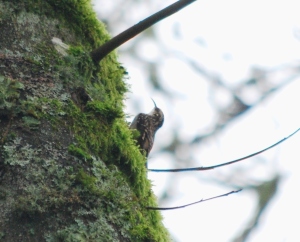 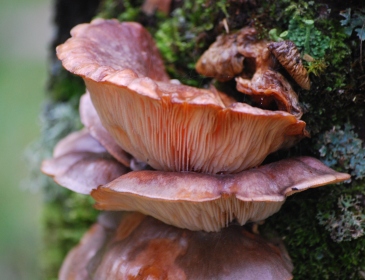 So with Joey’s muddy feet and a list of birds any birder would be proud of for this area, I called it a day.  Thirty species in a couple of hours, great exercise, plenty of beauty, and fun buddy along for the walk – that’s a good day.

The Art and Craft of Blogging